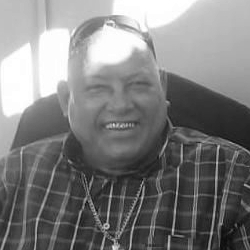 He was a man of integrity who served the South African community, especially East London community since 1982 and made sure nobody was victimized. He fought apartheid from inside the SA police force with Gregory Rockman and members of POPCRU . He was introduced to ASSUPOL by Lt. Hansen and was a faithful member of SAPS especially specialized units dealing with priority crimes. Murders and robberies across borders, towns, cities, provinces was never a problem to him as he had the most brilliant relationships with everyone who crossed his path, even criminals, although he was feared, they well respected him. He stood for the truth and giving closure to bereaved families of victims of crime. Criminals could run from him, but they could not hide from him, even his own family knew he was strictly upholding the law and he arrested several for serious violent crimes.